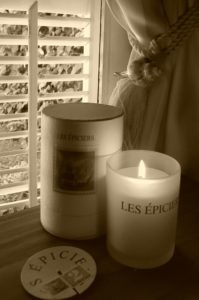 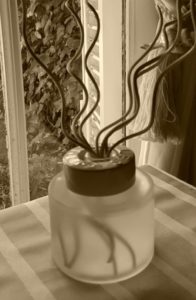 Pliny tells us that the origin of the perfumes must be traced back to Persians. According to his observations they were always impregnated. They inherited the cultural heritage from their ancestors, the Medes, a people of magicians and scientists, experts in numerous art including cosmetics and perfumery. The Persian miniatures often portray nobles and deities in the act of gently sucking the fragrance of flower surrounded by images of stylized corollas. The garden was a sublime place, so much so that in the Koran the paradise is called pairidaeza or “walled garden”.

Among the Babylonians the soldiers spread the body of perfumed balms during the propitiatory rites that preceded the battles.

Egyptians and Assyrians, just to mention some of the most ancient civilizations, attributed a magical-sacral power to perfumes. Precisely because of their ethereal nature and beneficial effects on the organism these characteristics were attributed divine characteristics so much to be considered the means by which the gods communicate with men.

The first documents on perfumery date back to the Egyptians. In this civilization to fragrances, the production of which was the sole responsibility of the priests, the property was attributed to act as a link to human aspirations in the afterlife. Emblematic is the ritual of embalming: at the death of Pharaoh, his body was deprived of the bowels, cleaned with pine oil, filled with essences such as myrrh, cassia and cedar and finally wrapped in bandages impregnated with aromatic oils.

But as luxury and sophistication entered private life, the Egyptiang began to use odorous substances even in daily hygiene.

In the Indian tradition, each perfume is identified with a deity, and the finest fragrances match the parts of the body. Among these, linked to the cult of Krishna is the sandal whose fragrances is impregnated with garments used in ritual celebrations. Already in the Egyptian culture to the magical-sacral significance was added the most profane, linked to the art of seducing. Egyptian women spread their balms on their bodies and placed perfumed pomades on their refined hairstyle.

Even in Mesopotamia, in laboratories close to the temples, fresh plants of rose, lily, pomegranate and myrrh were to be used both during the liturgy and for perfuming and treating illnesses. Alexander and Great himself, when he moved the capital to Babylon, used to perfume his sumptuous tunics and rooms.

Women of ancient Greece, imitating their favorite goddess, used aromatic oils and perfumes for each part of the body, as well as balms and odorous ointments. Perfumes were a symbol of luxury and refinement and the most expensive and rare, the result of a long process of maceration, came from Delos and Corinth.

According to various testimonies and writings of the poets, the Roman noblewomen spent invaluable amounts for the cosmetics and the care of their body. The most common aromas were the balsam, the incense and the myrrh. The citrus aroma of lemon, bergamot and sandalwood from the Persian territories followed. But Roman vanity was not only feminine. Even the men of the patrician families spent their time devoting themselves to the care of the self and their beauty: baths, spas, massages and anointings were part of everyday life. Not only the body was perfumes, but also the hair, clothes and bed, and even the beloved, the favorite slave and the horses. They also perfumed the temples, the tents, the sedans and even the sails of the ships.

The Arabs of Islamic religion were famous for their sensual pleasures and for their taste for beautiful things and especially for all types of fragrance.

The Arabs were the first to use alcohol and to devise the still known distillation process. Until then the fragrances were used in the form of essences that quickly became rancid. The invasion of Spain By the Moors brought fragrances to Europe.

In the Middle Ages crusades import raw materials and perfume techniques from the East. Following the Chinese and the Arabs, the alchemists of Europe discover ethyl alcohol and distillation. After Marco Polo’s travels, inevitably, the spice trade intensifies. The perfumes are believed to disinfect and the protect against epidemics: the rich wear perfume bowls full of musk, amber of aromatic resins. The use of perfume accompanies the birth of a certain lifestyle. The poet sing lyrically femininity. Despite the warnings of the Church, gallant men and their ladies taste the pleasures of the flesh in the sensuality of perfumed baths.

The Renaissance offers a new vision of the world. Architects. engineers, artists and writers travel in Europe. It is the golden age of patronage and age. After alchemical recipes, the fist chemistry treaties appear.

The Renaissence was a very productive period, thanks to the interest of noble such as Caterina Sforza, Isabella and Alfonso d’Este, Cosimo de ‘Medici, who loved perfumes a lot, and also thanks to the arrival of raw material until then unknown brought by explorers returning from their great journeys.

At that time, Spain held the monopoly of ingredients such as musk, ambergris, civet, sandalwood and bergamot, which also served to impregnate the tanned hides with which gloves and belts were produced.

In England it was Queen Elizabeth I who gave the decisive impulse to the development of perfumery; in fact, she imposed on her subjects to grow flowers from essence and to learn how to produce smelly and diffused waters at home the use of pomanders, balls made from amber which she used to keep in hand to keep away infections.

In Italy is was at the forefront of the art of perfumes: Florence, Venice were famous throughout Europe for their workshops, and it is in Venice that the first books on the art of cosmetics and perfumery were published.

We must wait for the 1533 year in which Caterina de Medici arrives in Paris accompanied by her trusted astrologer and her personal perfumer because perfumery in France began to become a serious business, but in a short time the French artisans became real experts. Louis XIV, the Sun King, was fragrant and so his successor Louis XV and his famous lovers, Pompadour and du Barry, who spent fortunes with perfumers.

The 1900 is the Belle Epoque, the perfume becomes a luxury product, now has a name and a bottle. The Art Nouveau unleashes enthusiasm.